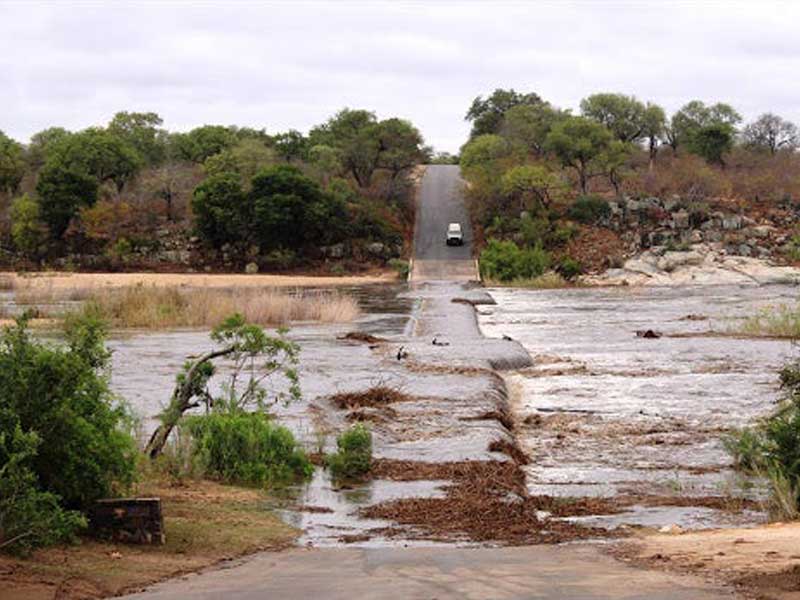 Various areas of the Kruger National Park, more specifically the areas to the North, have received a high amount rain in the last while. Management at the Kruger National Park have been advising visitors that are driving around in the park to be vigilant and to avoid the use of gravel/dirt roads until further notice. Though the rains have stopped or at  least cleared up a bit, the rivers will still be rising and falling for a while. The Head of communications of SANParks, Reynold Thakuli, stated that camping sites of camps to the north as well as any gravel/dirt roads have been closed while the rains were falling, to avoid dirt spillage and landslides.

Any visitors that have booked in the flagged areas have been moved to safer camps for the time being. It is advised that guests as well as rangers on safaris stick to the tar roads while driving in the Park. The Remote camps and roads that have been closed include; Bateleur Bush Camp, Shimuwini Bush Camp, Sirheni Bush Camps and a few others in the area.

All gravel roads in the northern regon of the park have been closed till further notice. These roads include all roads from Pafuri to Lethaba, with the exception of a few roads including the Giriyondo Gravel Road. This road will be maintained and kept under surveillance for the time being. Other roads will open and close as things further develop. Guests are advised to that all roads that have a No Entry sign on it as well as any other roads that have obstructions, to be avoided as they could be dangerous to travel on. Guests have also been advised to avoid crossing any low water bridges as the strong currents can wash away vehicles and visitors alike.

Reynold Thakuli stated that some areas of the park does not have mobile network coverage. Anyone that has/ had any information about the rainfall in and around the Kruger Park are allowed to enquire as well as provide information to the Information centre. If anyone has any information or has spotted anything that might prove useful, they are encouraged to communicate via the SANParks Kruger National Park Facebook page.

Looking at the recent rains in a positive light, waterlevels have risen in numerous dams and rivers, providing sufficient water to quench thirst as well as breathe life into the surrounds.